Created 12-Jun-12
Modified 12-Jun-12
Visitors 32
55 photos
Go on a week day and you'll have fewer touristas to deal with at one of California's restored Spanish Missions. The grounds are well kept, buildings clean (as can be under these conditions), and displays authentic (I hope).

"Misión La Purísima Concepción De María Santísima (Mission of the Immaculate Conception of Most Holy Mary) was founded by Father Presidente Fermin de Lasuén on December 8, 1787 and was the 11th of 21 Franciscan Missions in California. During the Mission's early years, several thousand Chumash Indians were baptized into the Catholic Church; over 100 large and small adobe buildings were built; a water system was developed; crops and livestock were raised, and La Purisima grew and prospered.

"Buildings and other features of the Mission eventually collapsed from weather and long neglect. In 1933 when the property was given to public ownership by Union Oil Company, the Mission was a complete ruin. Preservation and reconstruction of the Mission complex began in 1934 through efforts of the County of Santa Barbara, the State of California, the National Park Service and the Civilian Conservation Corps. Under direction and labor from the latter two organizations, buildings and grounds were restored and furnished to appear as they had in 1820.

"At present, the mission is within La Purisima Mission State Historic Park, an area of 1,928 acres - a small but most important portion of the original 300,000 acre mission property. Ten of the original buildings have been fully restored and furnished authentically; other structures have also been restored including the historic aqueduct and water system.
A five-acre garden shows native and domestic plants typical of a mission garden, while mission-type animals such as burros, horses, longhorn cattle, sheep and goats are displayed in a corral located in the main mission compound. In addition to the historic buildings there is a picnic area and approximately 25 miles of hiking trails."
Categories & Keywords
Category:Architecture and Structures
Subcategory:Churches
Subcategory Detail:
Keywords:California, Indian, Spanish, architecture, history, la purisima, mission, tourist, vintage, vintage
© Dave Skinner Photography 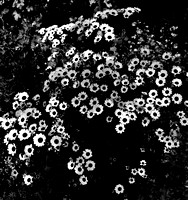