A dedication of the museum in his honor was held Memorial Day 2012 at the museum. A number of his family attended, including his daughter, Carolyn Davis Reese.


Don Dahl and I recorded the event with our photography skills, such as they might be. It was a wonderful time of remembrance for all.

"In the Main Museum you will see exhibits on training at Camp Roberts during WWII, the Korean War, Vietnam, the Gulf War and Iraqi Freedom, as well as exhibits on Corporal Roberts (the Camp's namesake), the National Guard, the Women's Army Corps, the WWII railroad station, Camp Roberts celebrities, dining facilities, civilian workers, the hospital, the PX, the Soldiers Bowl, and others. There is also an extensive patch collection, a small reference library and a video viewing room. The Main Museum also has a large gift shop with books (including "The History of Camp Roberts"), WWII postcards, posters, DVDs, clothing and many other interesting items. 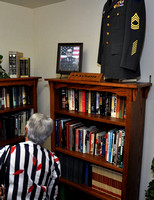